Nearby apartment towers have not brought shoppers 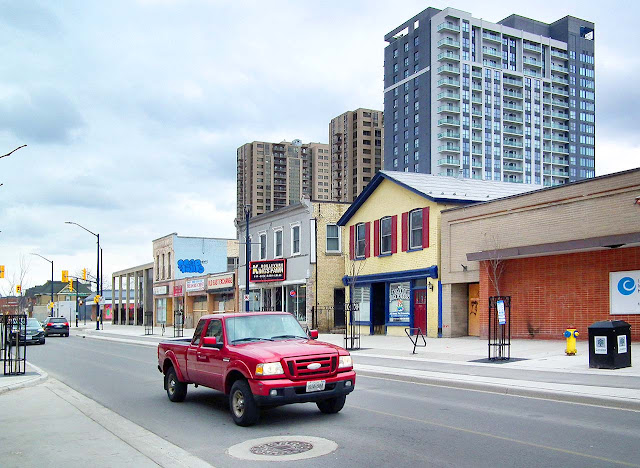 East London has been in trouble for decades. At one point, Dundas Street running through business section was ripped up and replaced with a curved section of road surfaced with paving stones. This unique roadway was supposed to ignite renewed interest in the area. It didn't.

Family businesses that had operated successfully for years were closing regularly and the empty stores remained empty. Blaming the curved street for the collapse, the failure to attract new businesses became the go-to-reason for the derelict district.

The curved road was straightened. The paving stones were lifted and removed. The straight road was made cyclist friendly and to encourage parking cutouts were created. No shoppers appeared. The neighbourhood residential density was said to be too low to support a business district. High-rise apartment building were encouraged and today the old East London shopping area is in the shadow of a number of high-rises.

The street is quieter today than it has ever been. More stores are empty and boarded up than at anytime in the past. The parking cutouts sit empty most of the day and the only thing one can say with assurance about the residents in the high-rise apartments is that they do not frequent the old East London core.

This does not surprise me, what with city planners here.