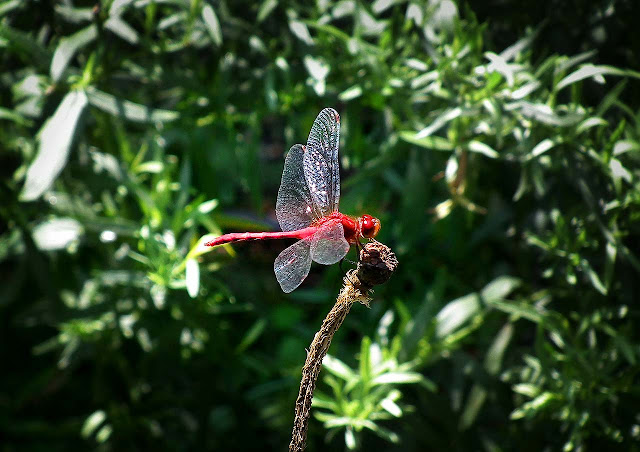 Dragonfly or damselfly? Until I took a picture of this ruby meadowhawk and hit the Web seeking to learn more about my subject, I had thought that dragonflies and damselflies were simply different names for the same flying insect. I was wrong.

Dragonfly adults have robust bodies, and perch with wings held out to the side. The eyes are huge and may meet at the top of the head. The bodies of damselfly adults, on the other hand, are slender, and most damselflies fold the wings together over the abdomen when resting.

Damselfly eyes are very large and are set to the side of the head rather than dominating the front as with dragonflies. The two even look different when in flight. Dragonflies have a smooth flight path while damselflies flutter.

The meadowhawks are skimmers. Why these dragonflies are called skimmers is a good question. It certainly is not because of how they catch their prey. Meadowhawks perch on twig and rocks, sit quietly and scan the immediate area for flying insects. The ruby meadowhawk in my photo is seeking a meal on the wing.